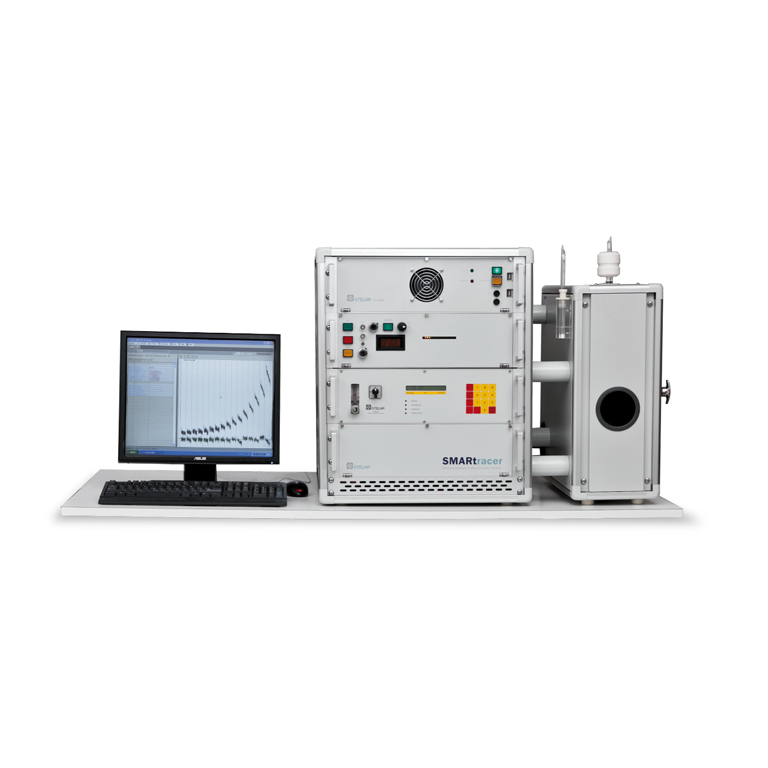 SMARtracer™ is an innovative, cost-effective, Fast Field Cycling NMR instrument designed to measure the field dependence of the NMR longitudinal spin-lattice relaxation time, T1. The transverse spin-spin relaxation time, T2, may also be measured.
(see note)
The SMARtracer™ 0.25 tesla system allows measurement of NMRD profiles from 10 kHz to 10 MHz (1H Larmor frequency) and is capable of measuring fluorine as well as the proton nucleus.
SMARtracer™ is the ideal instrument to exploit the high quantity of information contained in the NMRD profiles acquired by means of Fast Field Cycling NMR relaxometry techniques, in clinical and industrial applications. 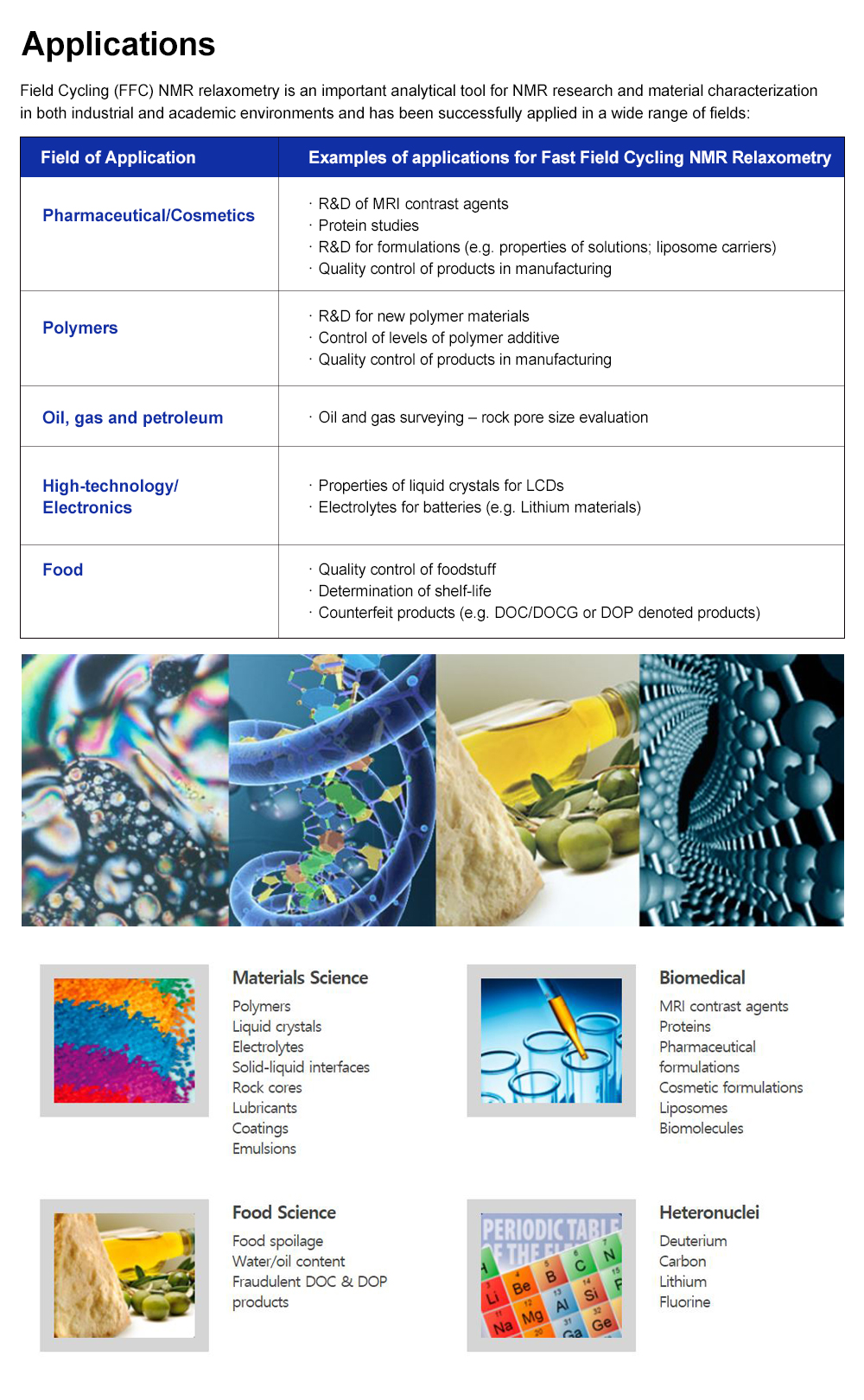 FFC NMR relaxometry is a non-destructive low-field magnetic resonance technique which is performed in the range of a few kHz up to around 100 MHz, depending on the instrument (unlike FT-NMR spectroscopy which tends to work with magnetic field strengths from 200 MHz upwards). The information obtained is connected to the molecular dynamics of a substance or complex material through the measurement of the nuclear spin-lattice constant 1/T1 over a large range of magnetic field strengths, which is carried out on the same instrument (relaxometer). The technique is particularly useful in revealing information on slow molecular dynamics which can only be carried out at very low magnetic field strengths. For a more detailed explanation see Fast Field Cycling NMR relaxometry (section below) and Relation of NMRD to molecular dynamics.

Examples of important molecular dynamics information which can be obtained through FFC NMR relaxometry:

The magnetic field dependence of 1/T1 of any given substance or material is shown in the graphical form as a Nuclear Magnetic Resonance Dispersion (NMRD) profile. The NMRD shown below shows the different profiles of a foodstuff before (black squares, unspoiled) and after it has expired (red dots, spoiled).

The relaxation rate 1/T1 of a substance or material will tend to change when there is a variation in molecular dynamics, which may be caused by the following:

Relation of NMRD to molecular dynamics

Molecular dynamics are generally rotational or translational motions that are modeled as small angle or small step translational jumps which occur randomly in time. The random functions of time are usually characterized by a time correlation function that characterizes the conditional probability that if there is a particular orientation or position at time t, what is the probability at time (t + τ) later? For Brownian rotational diffusion, the correlation function decays exponentially:

Where B2 is the strength of the coupling modulated and τc is the correlation time for the molecule to diffuse approximately one radian. Nuclei are relaxed by the transition induced by these fluctuating fields at the Larmor frequency (single quantum) and twice the Larmor frequency (double quantum) spin flips. What motions are important depends on the magnetic field strength experienced by the nuclei. The more intense the fluctuations are near the Larmor frequency, the faster the spins relax. The frequency dependence of the fluctuation intensity, i.e., the power spectrum or the spectral density, is the Fourier transform of the time correlation function. For rotation this becomes,

Which to within a constant has the form

Thus, the Nuclear Magnetic Resonance Dispersion (known as NMRD or MRD) maps the Larmor frequency dependence of the spectral density function that is related directly, by the Fourier transform, to the time correlation function characterizing molecular motions. Any motion that causes changes in the local fields contributes to the relaxation process including rotation, translation and chemical exchange among different chemical or physical environments.

A critical feature of NMRD is that it is possible to map spectral densities as low as 5-10 kHz which corresponds to a time regime in the vicinity of 30 microseconds, i.e., well into the range of chemical exchange events. Variations of the method permit exploration to lower frequencies. See also page on Frequently Asked Questions.

Acknowledgement: Thanks to Prof. Robert G. Bryant (University of Virginia, USA) for providing some of the text for this section.